The Palace Project 1: Using color as a structural element, type sizes and color for hierarchy, using scanned material and screenshots as visual material.

This slide is from the overview/background part of the presentation where I am talking about the architecture of the palace. I am using a light background, which I will later alternate with a dark one in order to achieve a structural distinction. I am also using color, size and keyboard arrows as part of the typographic structure to achieve a hierarchy. 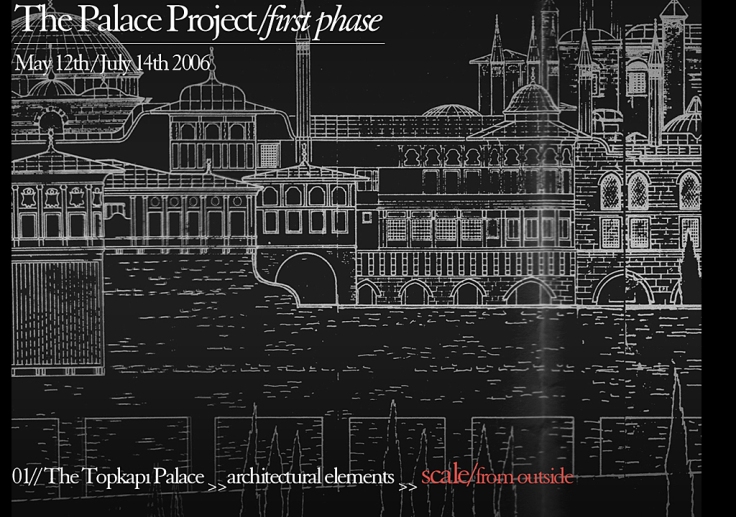 An example for a slide in which I use scanned material. The actual scan did not look great so I chose to invert it which also gave me a nice structural color variation for this particular subsection of the presentation. 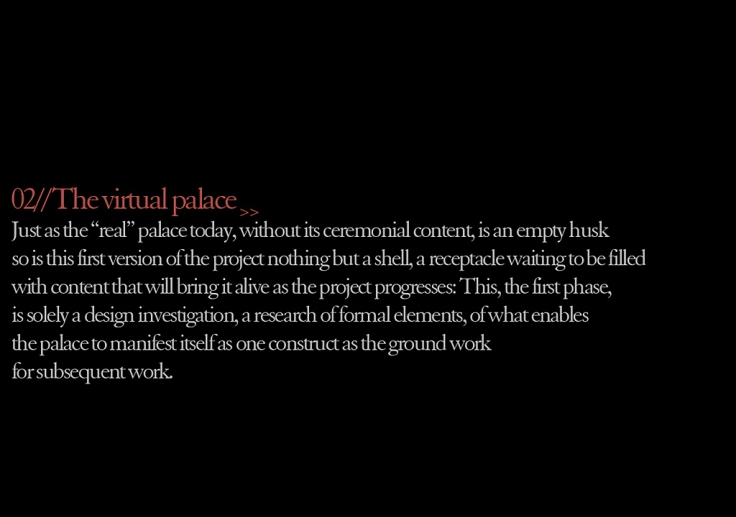 As I switch to the body/main part of the presentation where I am discussing my own design work, I also make a complete switch from light to dark background.

The Palace Project 2: Using combinations of type and image.

4 slides where I am placing the image in the background and putting the type on top of it in boxes. Although the treatment varies between slides I achieve consistency through things like fonts, kerning, leading of type, the two dotted lines at the top and bottom of the sub headline (which is actually at the bottom of the page, rather than the top). Also all type boxes are white, and have no borders. The full presentation can be downloaded from here >>>.
_________________________________ 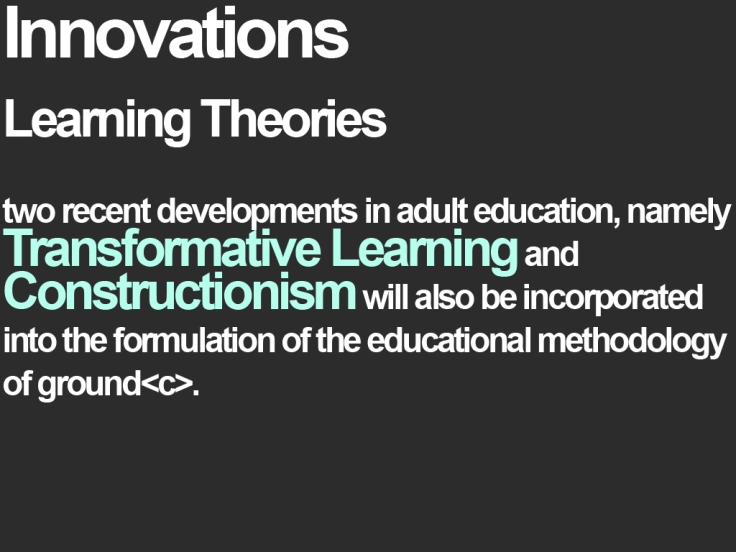 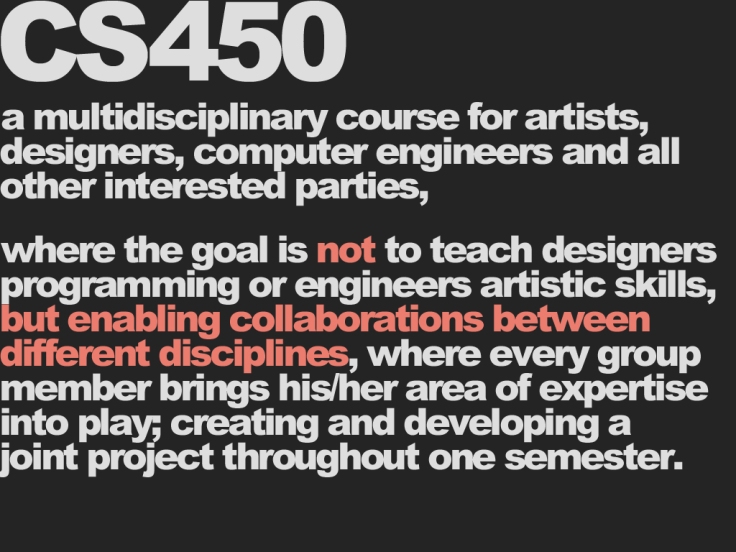 In all of the three slides above I used color and size (or even a combination of both) to achieve textual hierarchy. This would have been very difficult to bring about through spatial means or clustering, since there is hardly any negative space.
_________________________________

Using graphs and shapes: I really like using them and advice you to do so also, since this is one of the best ways that I know of to bring hierarchy and order into a presentation as well as show your work flow – not to mention the fact that if you do a good job they will also look very nice.

For all of the slides below I started out with the yed graph editor, which is a free Java based application that anyone can download from here. This is one of the nicest softwares that I have ever used, although it does take a while to customize things. I saved the generated diagrams as transparent gif files and then placed them together with the other material in photoshop. (Tip: If you decide to use this, save the gif files scaled up at least 2 times, even 3 times if it lets you do so. The stuff is aliased, so there are pretty hard edges which scaling down in photoshop seems to fix very nicely).

The two slides above come from a presentation where I used graphs in combination with images for the first time. To this end, I placed the graph layer as an overlay in photoshop. These two are actually part of a 5 slide sequence in which I had the same graph stay in exactly the same location throughout and only the images underneath it changed, creating an animation of sorts, while I was talking over them. The powerpoint for these is lost, so I cannot give you a download link to see for yourselves.

Constructing Transformations: <ground-c>: In this one I used the graph, together with color fields as a navigational aid which leads the viewer from one topic into the other. So, the dotted line is actually moving off the page where it then connects to the next slide down the line. It did involve a lot of alignment both in the graph editor as well as in photoshop to get the effect right but it did work quite well in the end. 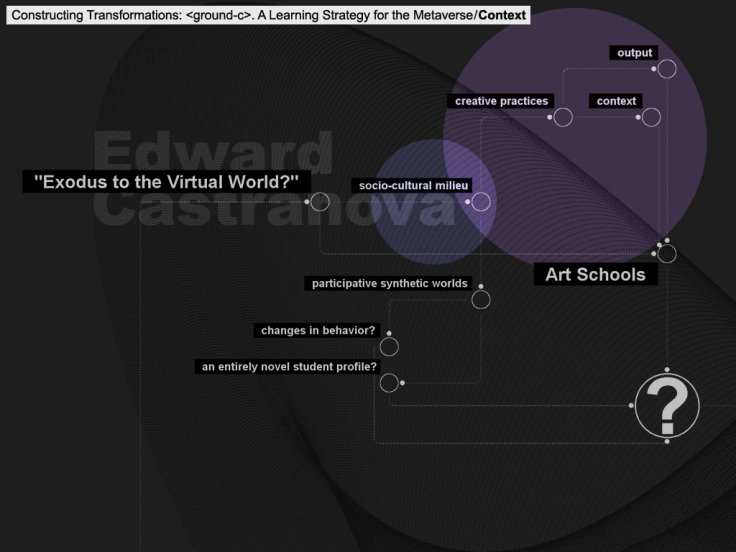 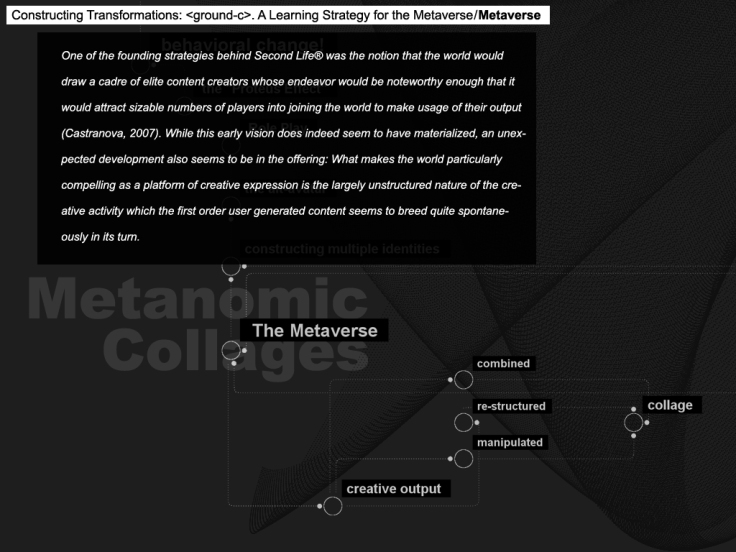 I have actually added quite a few slides from this presentation since there are other things related to the usage of visual material and typography that I want to point out in these as well: First off, the headlines of the main sections are actually placed in the background, very large. Together with the graph, these big chunks of type remain in their places for as long as that section is being presented while all the other visual elements over them change. So, although they are backgrounded they still remain prominent/foregrounded through their longevity. One of the changing elements are the colored disks which move from one sub-topic to the next as I continue to talk, so they are actually a navigational aid. I used images in only a few of the slides but wherever I used them I blended them into the background with a layer mask. There are also quite a few lengthy paragraphs which I am using in this presentation and those I placed in boxes, very much in the way that I did with the 2nd Palace Project presentation above. So, unlike a standard visual presentation where everything would be on one plane I am actually layering the content. The very last slide in the presentation is shown here on the bottom and for me there was a very important question that I was asking and that I highlighted with white boxes, very much following the visual effect that happens when a piece of text is highlighted on a computer application. In fact, here is the trick for that: Select the text in photoshop (make sure there is no bounding box, unless you want to make that part of the effect), take a screen capture of the area which is selected (nice little tool for PC is to be found right here >>>). Paste the capture back into photoshop, align with the actual text which you had selected. Delete the original text – and there you have it… The powerpoint for these slides is here >>>. And please download and watch this one since in it I am also using transitions in the way which I discussed here under structural elements >>>.

Conversations, P-individuals, Avatars: This presentation and the one before this one are for conference papers which are almost a continuation of one another, given within a month of one another. And on top of that, they were also given to audiences where a lot of the attendees would be the same. So, I made a point of having them be stylistically similar: I used the graph system in both of them. In both of them I also used transitions as sliders from one section to the next. What differs is that with this second presentation I have images in the backgrounds of almost all of the slides. Which meant that I had to be very careful to not to do a visual overkill. In order to pull this off I muted the saturation values on the images so that they glided into one another without causing too many hue disruptions.

The full powerpoint from which the images above are taken is here >>>. A flipbook in which the slides were used as visual material can be seen here >>>. However, this “book” has not been designed as a presentation since the type on the pages is much too small for it to ever be considered as one such.